Folk singer and activist Pete Seeger once said of folk music that it, “helps reinforce your sense of history. An old song makes you think of times gone by.” In a way, music is magic. It can transport you to a different time and place with a few simple notes.

As much as Walt Disney believed in progress, he also had a strong streak of nostalgia, a wistful romanticizing of the turn of the century world he grew up in. Nowhere is this more evident than in the 1949 feature So Dear to My Heart. Based on Sterling North’s novel Midnight and Jeremiah, the film is set in Indiana and tells the story of a young boy raising a black-wool lamb. 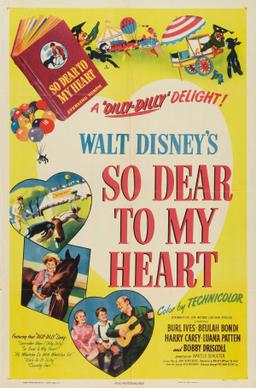 A midwestern boy himself, Walt was particularly attached to the movie, stating, “So Dear was especially close to me. Why that’s the life my brother and I grew up with as kids out in Missouri.”  He was so enamored of the film, that he built a gorgeous model of “Granny Kincaid’s cabin,” which he intended to use as part of a traveling exhibit called Disneylandia. Though the idea never came to fruition, it served as part of the early inspiration for Disneyland. That influence can also be found in visiting Disneyland’s Frontierland train station, which was patterned after the station in the film.

While the movie was not a commercial success and has fallen into relative obscurity, it did earn an Academy Award nomination for “Best Song.” Credited to Eliot Daniel and Larry Morley, and performed by Burl Ives, the song, Lavender’s Blue (Dilly Dilly), was actually an adaptation of a centuries-old folk melody. It is performed twice in the movie and helps create the cozy, front porch feeling that flows throughout the film. 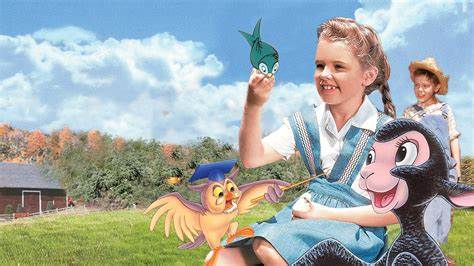 Tracing the origins of a folk song is never an easy task. They’re elusive by their very nature, passed from person to person, picking up and losing lyrics, incorporating bits and pieces of other melodies together. They’re a bit like the river in Disney’s Pocahontas. You never step in the same one twice. That’s especially true of Lavender’s Blue, which underwent a fairly substantial transformation from its earliest days.

The Story of a Song

Lavender’s Blue appears to date back to the 17th century and a song titled “Diddle, Diddle (or The Kind, Country Lovers).” However, even that only gives us an inkling of the song’s history, as notes from the published broadside instruct performers to sing the song to the tune of “Lavender’s Green,” implying the existence of an older melody that likely would have been well known to all performers at the time.

The lyrics in this early incarnation are a far cry from the sweet and tender love song performed by Ives in So Dear to My Heart. Instead, the lyrics are a bawdy celebration of the narrator’s desire for a young maiden who will get drunk with him and keep his bed warm.

The book “Popular Rhymes and Nursery Tales,” by John Russell Smith notes a version of the song titled “Twelfth Night,” explaining, “The following verses are said to be in some way or other connected with the amusements of this festival. They refer probably to the choosing the king and the queen on Twelfth-night:

The song was also published in the 1805 book “Songs For the Nursery,” which was penned by an anonymous author (theorized to be Eliza Fenwick).

The Oxford Dictionary of Nursery Rhymes by Peter and Iona Opie notes that the song was, “remembered almost solely in the nursery until 1948-49 when a dance version…popularly swept America and Britain.” Though not stated expressly in the book, this time frame corresponds with the release of the Disney film.

Songwriter and lyricist Eliot Daniel lent his talents to adapting the melody for Disney. Born in 1908, Daniel had a long career composing music for the movies, though he would become best known for writing the theme song for I Love Lucy. His work with Disney included contributions to Make Mine Music, Fun & Fancy Free, Melody Time, The Magical World of Disney, and Little Toot.

The lyrics for Disney’s version of Lavender’s Blue were provided by the remarkable Larry Morey. His resume includes contributions to animated shorts like Ferdinand the Bull, The Grasshopper and the Ants, and The Wise Little Hen. However, he is best remembered for his work on films like Snow White and the Seven Dwarfs (including songs like “Heigh Ho,” “Someday My Prince Will Come,” and “I’m Wishing.”), The Reluctant Dragon, and Bambi.

His accomplishments are all the more remarkable given the difficulty of his early life. His Wikipedia biography notes that he was born with a skeletal abnormality and that, “His left arm was not fully formed and caused his mother to reject him at birth, saying “he would never amount to anything.” She abandoned him to the care of his father, George T. Morey, a traveling musical ventriloquist. When he was only six years old, his father left him in a boarding house in Los Angeles and went on the road performing throughout California.” 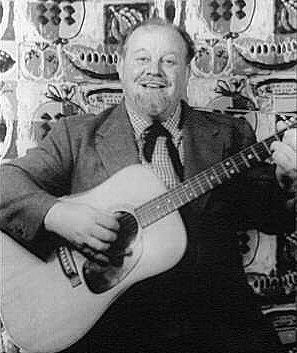 Modern audiences are most likely to associate Ives with his depiction of Sam the Snowman in the 1964 holiday classic Rudolph the Red-Nosed Reindeer. However, he had a career that spanned multiple mediums, with appearances in movies, on Broadway, on record, and on the radio with his program The Wayfaring Stranger.

One of six children, Ives’ first public musical performance came at the age of 4 when he sang at a soldiers’ reunion. His broad knowledge of traditional song was learned at the knee of his mother, Cordelia White, and his grandmother, Kate White. He wrote of his early years, “The rich Illinois land doesn’t stretch down to Jasper and except for the bottom land you can’t raise anything but nubbins there. . . . From the time I was born until I was school age I remember we lived on four different farms. There were seven of us children, three girls and four boys, and we always did a good bit of singing in the family.”

Speaking of his grandmother, he wrote, “To me her ballads brought a world shining with excitement and color; they brought people — like Barbara Allen dying of love and a lone lover sitting on top of a snow-covered mountain. I had never seen a mountain on the prairies of Illinois. Pictures, romance, passion, bravery, gallantry, sorrow, joy — she sang a storybook of tales culled through centuries and tempered by time into beautiful poetry. Kate loved the ballads and loved to sing them for the boys and girls, and that was her religion.”

He learned the banjo as a teenager but did not intend to pursue a career in music, instead planning to become a football coach. Those plans dropped by the wayside when he dropped out of school. In his autobiography, also titled The Wayfaring Stranger, he notes that he was listening to a lecture on Beowolf when he realized that he no longer wanted to be in school. He stood up in the middle of the class and walked out, slamming the door so hard that the glass in the door window shattered.

From there, he set off on the road as an itinerant performer, even landing himself in jail while traveling through Utah. It seems that he was accused of vagrancy, and for performing the folk song “The Foggy, Foggy Dew,” which authorities deemed “bawdy.”  His wandering eventually led him back to higher education, as he studied at Julliard School before breaking into Broadway and Radio.

A biography on the Association for Cultural Equity (ACE) webpage notes, “From the 1940s through 1960, Burl Ives was considered America’s most authoritative interpreter of American folk songs. A mainstream figure (better known than Pete Seeger and Woody Guthrie), his penetrating, tenor voice with its unique timbre was recognized by millions.”

He would make “The Blue Tail Fly” and the gorgeous, haunting spiritual “The Wayfaring Stranger” his signature songs.

In 1946, he made his film debut in the movie Smoky. Three years later, he appeared in Disney’s So Dear to My Heart. Controversy would soon follow Ives when, in 1950, he was identified in the pamphlet Red Channels and blacklisted as a Communist. Fearful of losing his livelihood, Ives would testify before the House of Unamerican Activities Committee two years later. Accounts vary as to the number of names Ives provided to the committee, with friends stating it was no more than 4, while, “the popular impression was that he had named many more. Sing Out! Magazine (in its 1995 obituary of Ives) wrote that he “named more than 110 people he knew to have left-wing or communist leanings. Many of these names were previously unknown to the committee.” Ed Cray’s biography of Woody Guthrie, Rambling Man, (2004) says that “according to newspaper accounts” he named “hundreds.”

The testimony led to years of acrimony between Ives and the folk community, including artists like Pete Seeger and others who continued to be blacklisted after Ives’ name was removed from the list. Despite the conflict within the folk community, Ives’ career continued to flourish, appearing as “Big Daddy” in the movie adaptation of Tennessee Williams’s Cat on a Hot Tin Roof and even winning an Academy Award for his role in the film Ensign Pulver. He would also work with Disney again in the 1963 film Summer Magic and later provided the voice for Sam Eagle in the America Sings show in Disneyland.

As a sort of coda to Ives’ story, Seeger and Ives were reunited and seemed to bury the hatchet some 41 years after the HUAC testimony. A story in the Meacham Journal notes, “Forty-one years later on May 17, 1993 — 28 years ago today — the bitterness ended.

The then ailing Ives, 84, and Pete Seeger, 74, were reunited in a benefit concert in New York City. They sang “Blue Tail Fly” together. Following Ives’ death in 1995, Seeger praised his tenor voice and the role it played in keeping so many important American songs alive.” 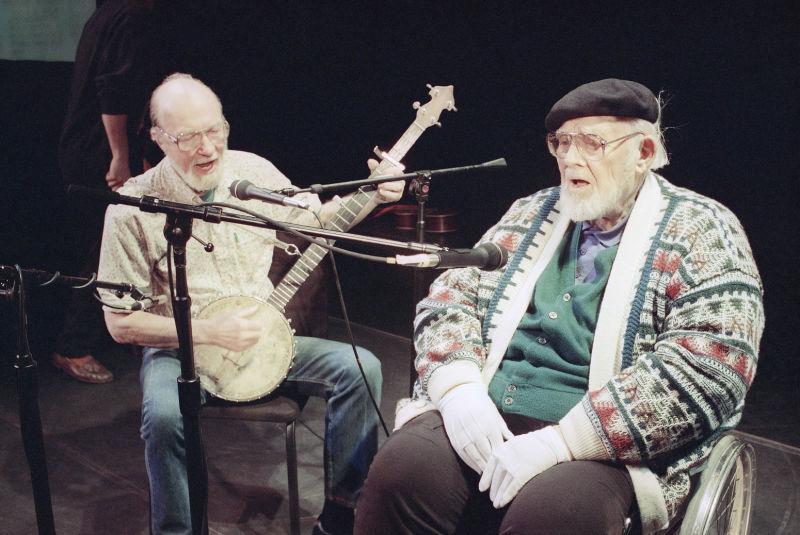 Studying music is a curious thing. Pull at a single strand and you find that it’s connected to an almost infinite number of others. From one song, like Lavender’s Blue, we stretch our reach back over centuries. We follow that thread into the nursery and find mothers singing lullabies to their children. Pull a little harder and we find ourselves learning the history of entertainment in the 20th century, as well as looking at the pain, fear, and, darkness looming in our past in the form of things like the Red Scare. We find passion, betrayal, fear, and even, perhaps unlikeliest of all, reconciliation.

It brings to mind another quote by Seeger, when he said, “And when one person taps out a beat, while another leads into the melody, or when three people discover a harmony they never knew existed, or a crowd joins in on a chorus as though to raise the ceiling a few feet higher, then they also know there is hope for the world.”

I dabble in an assortment of literary and artistic endeavors. My writing has appeared in Celebrations Magazine, Old School Gamer Magazine, Texas Heritage Magazine, Renaissance Magazine, Cowboy Jamboree Magazine, and other disparate locations. View all posts by Shaun Jex